The Best Heads Up Display 2021

Car heads up displays (often referred to as a HUD) are a common optional extra in modern vehicles but you can install an aftermarket HUD yourself at a fraction of the price. In this article, we list some of the best that use GPS technology or an OBD connection. 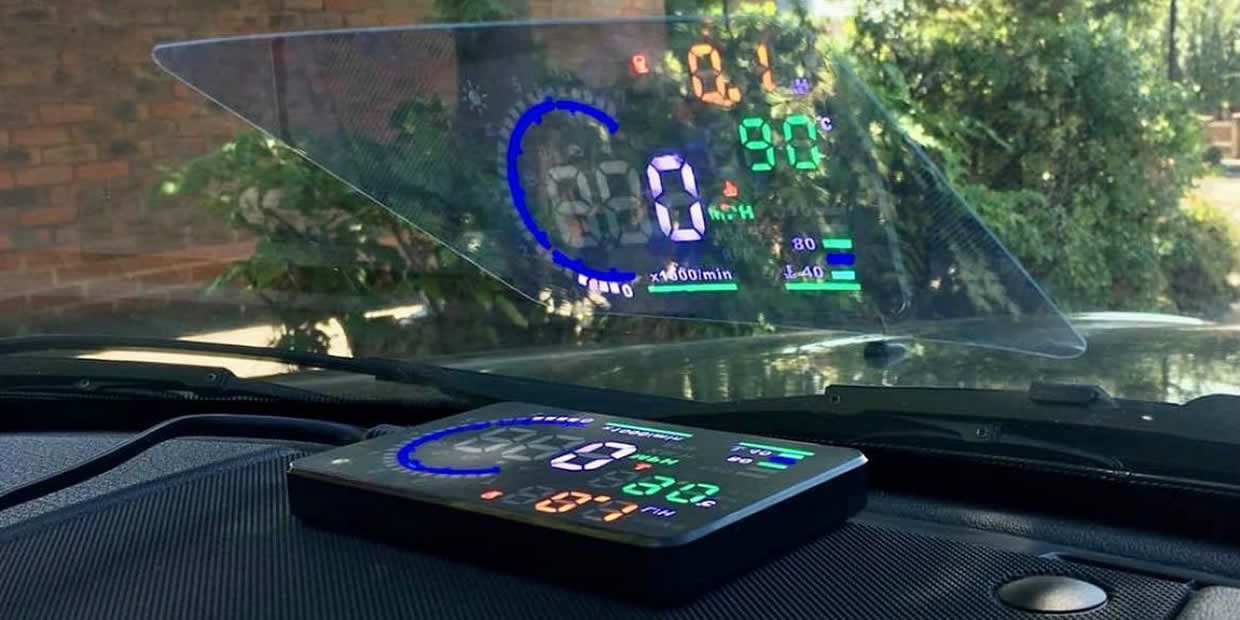 The best heads up display for cars is the LTC Original, which is a GPS based HUD that’s basic in design but provides a clear speed output in either MPH or KPH. If you have a car with an OBD port, the Kairiyard 4 is a great alternative that’s packed full of functionality and outputs a variety of live data.

Below is a list of the best heads up displays that are universal and connect via the OBD port or use GPS technology.

The Best HUD For Cars

By far one of the most popular car heads up display devices in the UK is the LTC Original HUD. It’s relatively basic in terms of its functionality and design but it’s easy to setup and is suitable for all vehicles regardless of their age.

Other features of the LTC Original HUD include:

If you require a basic heads up display for your car that doesn’t require any wiring to the OBD2 port, the LTC Original is the best option. Compared to other devices in this article, it also offer great value for the money too.
Check it Out

If you are looking for the ultimate HUD, the Kairiyard brand have the answer with their OBD connected device. It isn’t the cheapest but the amount of functionality and data feedback is worth paying the extra for. As with some of the popular OBD2 scanners, this HUD offers similar functionality such as live data, error code checking and much more.

Other features of the Kairiyard OBD HUD include:

The Kairiyard OBD HUD is the ultimate car heads up display for those that want to view more than their current speed. It’s packed full of functionality such as reading live data to even having the ability to clear error codes. The only drawback is the price but it’s a worthwhile investment that won’t disappoint.
Check it Out

The BNTTEAM brand offer a variety of car heads up displays but this particular model is by far their most popular. It’s a plug and play device that connects with your car’s OBD port for retrieving speed, RPM and other informative data.

Other features of the BNTTEAM Universal HUD include:

Overall, the BNTTEAM Universal HUD is an excellent all-round option that’s easy to install, provides a clear output of your speed and is also relatively affordable when compared to similar devices.
Check it Out

The YICOTA heads up display is another universal device that requires no OBD connection and connects via your car’s cigarette lighter. Through the use of GPS technology, it’s able to calculate your current speed, driving direction and other statistics.

Other features of the YICOTA GPS HUD include:

If you require a HUD that doesn’t require an OBD connection but provides more data than the LTC Original, the YICOTA option is perfect. The only drawback is that it’s expensive when compared to the alternative GPS models.

The FSVEYL Car HUD is a multi-functional device that connects to your car’s OBD port to provide 36 different data readouts along with the speedometer. Its the brand’s new and improved version of their heads up display and features a dual mode, which allows it to make use of both OBD and GPS technology.

Other features of the FSVEYL Car HUD include:

Overall, the FSVEYL heads up display is a well-made and affordable option that won’t disappoint. The addition of the dual modes means that it’s a completely universal device too.

One of the cheapest car heads up displays that’s actually worth buying is by the Autopmall brand. It’s an OBD and GPS HUD that’s capable of accurately calculating the speed you are traveling as well as outputting data from the car’s ECU.

Other features of the Autopmall HUD include:

Overall, the Autopmall HUD is a great choice for those on a tight budget but want a heads up display that outputs more than just the speed.

Although many modern cars may feature heads up display as an optional extra from the factory, the majority of cars won’t feature them. However, with an aftermarket heads up display like the above devices, you can install it yourself and at a fraction of the price. To avoid disappointment, we strongly recommend that your car has a compatible OBD2 port before choosing an OBD type of heads up display.