How To Treat Rust On A Car

Ignoring rust spots on your car can cause them to eventually spread and it’s advised that you repair and treat the rust before it gets any worse. In this article, we walk you through how to treat rust on a car and futureproof it against further rust. 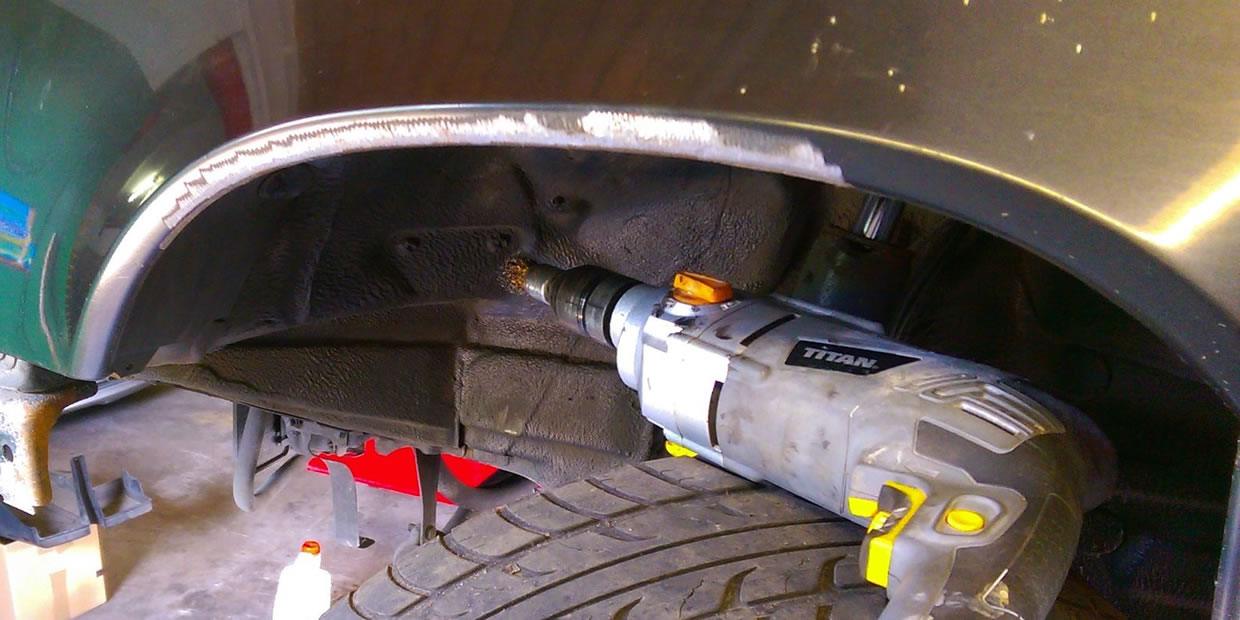 Treating rust is something that anyone who owns a classic car will be very familiar with (myself included). After owning a number of old Mercedes’s, treating the rust has been a task that’s been required every other year with at least one of the cars. However, learning how to treat rust on a car myself has saved any big repair bills and it’s straightforward to do too.

Below we walk you through any rust repairs you may need to do as well as the steps required to treat rust on a car.

Depending upon the severity of the rust, you may need to cut the rust out of the bodywork altogether before treating it. This may seem excessive but it will save you hours of preparation and will look better once it’s removed.

In order to expose all of the rust, we would recommend using a suitable degreaser around the area. This helps to reveal any additional rust spots that are hiding behind any tough dirt.

Once all the rust has been exposed, you can then proceed to cut it out using an angle grinder or alternative tool of your choice. Of course, once removed, you will need to replace the section with new metal, which requires welding.

Whether you use a MIG welder or a TIG alternative, you want to take your time welding so that you can achieve a clean weld or alternatively hire a professional to do it for you.

What Rust Treatment Product Do We Use?

Whenever we treat rust on a car, we use the Waxoyl Treatment, which is one of the best rated rust treatments for cars. In short, the formula can be simply sprayed onto any surface and it will kill any old rust as well as protect the surface against any new rust. It produces a “wax like” protective barrier that’s proven to be very effective. In the before and after results below, you are able to see the finish that it leaves behind.

As well as using Waxoyl, we often apply a heavy duty rust prevention paint upon exposed metal sections too. For example, if we have welded in a new metal section, we would apply the paint onto the metal before the Waxoyl.

How To Treat Rust On A Car

Before applying any products to the rust, you will want to thoroughly clean the area. As mentioned above, using a degreaser is a great method to reveal any hidden rust. However, if possible, we would recommend blasting away any dirt with a pressure washer beforehand and then applying a degreaser.

Once all the rust has been exposed, you can then proceed to remove the rust. Depending upon the severity of the rust, you may be able to use sand paper by hand to sand down the area to bare metal. However, if not, using a drill with a wire brush attachment or an angle grinder with an abrasive wheel is recommended.

Now that you’ve removed any rust, you can start treating the area. Firstly, you will want to cover any sensitive areas that you don’t want spray or paint to get on to. This can include the brakes, electrical components, engine as well as many other areas. The areas to cover up really depends upon where the rust you are treating is located.

Depending upon the product you use to treat the rust will determine how you apply it. Most are simple spray or paint on formulas that require even layers to be applied. If you use the Waxoyl treatment like we do for the underbody of your car, you need to heat the bottle up beforehand so that it sprays nicely onto the surface.

After you have sprayed or painted the area, you will want to allow it to fully dry out. You want to avoid driving it because this can cause dirt and debris to latch onto the treatment.

Before And After Results

As you can see from the below images, the rust has been treated and futureproofed to prolong the life of the car. The protective barrier formed by the Waxoyl formula is highly effective and certainly a product we would recommend. 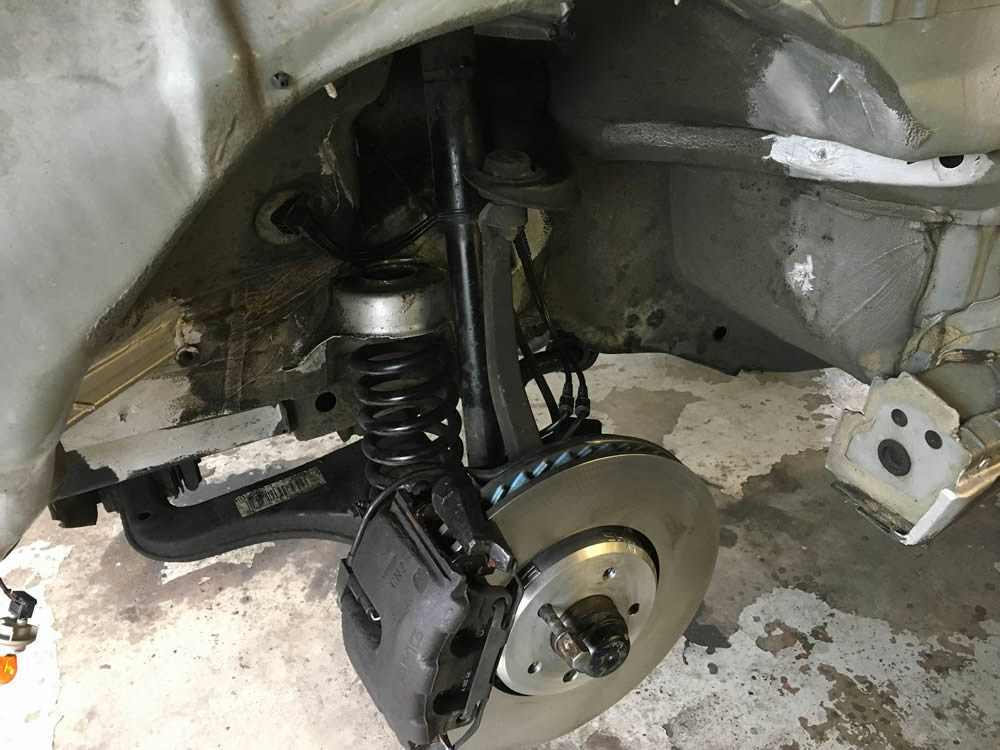 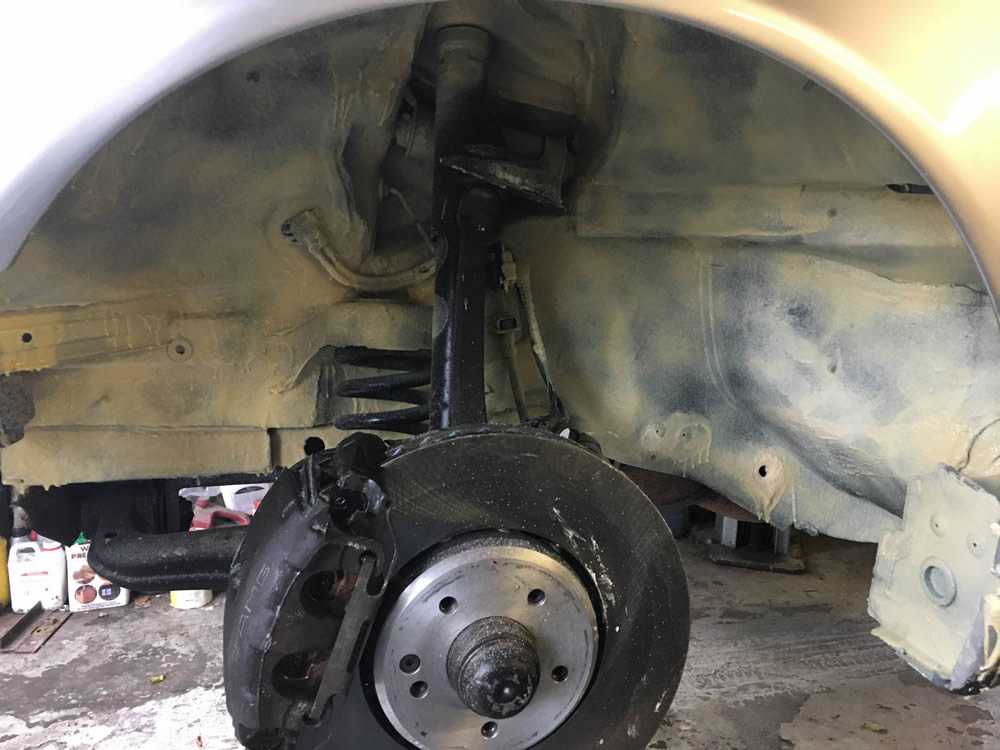 Rust is caused by metal being exposed to iron, oxygen or water and it can form on cars due to:

How To Avoid Rust

The best way to avoid rust is to carry out rust prevention maintenance as shown above. Simply ignoring the rust will allow it to spread and if you leave it too long, it could potentially make your car worthless. Other ways to avoid the build up of rust upon your car include:

Over the years of treating rust upon a number of cars, we have used multiple spray and brush on formulas. Regardless to the product you use, treating the rust in the first place will certainly help prolong the life of your car.

Depending upon where the rust is located on the car will determine the method you use to treat it. The above guide covers the most common area for rust which is the underneath of your car but rust can form anywhere. Personally, if there is too much rust on any of the bodywork panels (i.e. wings, doors, boot or bonnet), we usually replace the panel altogether. If you have any questions regarding how to treat rust on your car, feel free to get in touch with our team.